One voice at a time

With energies that are contagious, ideas that know no bounds and sky-high ambitions, youth are the future of every nation. History is full of examples of spirited, thinking young minds who led some of the most iconic movements from the front. Their ideas have helped shape human socio-political history. Islamic history is no different and our beloved Prophet (PBUH) placed the youth in high regard. Devout youth are 1 of the 7 groups granted the shade of Allah on the Day of Judgment (Bukhari 629 and Muslim 1031).

With that in mind and an approach of inclusion and appreciation, South Florida Muslim Federation is starting a series of blogs that focuses on our talented, thinking and driven youth. These exceptional kids and young men and women, are full of ideas that can help transform our community for the better. However, due to a lack of opportunity, support and encouragement, most are just lost in the humdrum of everyday life. Our hope is to become their voice, showcase their talents, and present them as an inspiration for other youth and a source of pride for the entire community.

As part of the series, let us introduce Ms Ramishah Maruf, an aspiring journalist from Coral Springs. 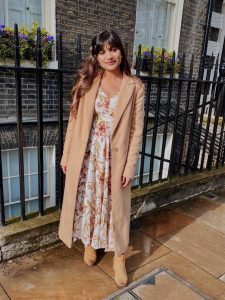 The first time you meet this young, Muslim woman, you cannot help but be impressed by the maturity and confidence with which she carries herself and the passion and eloquence with which she expresses her mind. For a 21-year old, she is far ahead of her years and has found her calling as a writer; and that is how she has come to be known among family and friends- an avid reader and an articulate writer.

Ms. Maruf is currently a senior at UNC Chapel Hill, where she is the arts and culture editor and diversity, equity and inclusion officer at The Daily Tar Heel, the independent student newspaper.

She is passionate about covering underrepresented communities, having written about legacy of slavery at UNC, refugee communities, South Florida’s Muslim community, politics and more. What further drives her purpose is the unconditional love and support of her parents, the need to be the voice of her community and bring about a change where it is necessary. Her passion has taken her from the newsrooms of her school and college newspapers to South Florida’s Sun Sentinel and CNN in New York, and now she looks forward to interning with Washington Post.

She is humbled by the positive feedback from the Muslim community here for her work, but feels it is unfortunate that not many Muslim youth are encouraged to take up Journalism as a profession due to ‘lack of stability’. In her own words, ‘Muslim youth are just as part of this country as anyone else, and our voices deserve to be heard. Your work matters, and you shouldn’t let anyone make you feel otherwise.’

Ms Maruf is well-aware of challenges Journalism as a profession poses, such as sexism and Islamophobia, among others. However, the knowledge of significance of having more Muslims in the media for a fair and accurate representation takes precedence over the former. According to her ‘it’s the best fix’ to counter stereotypes. She knows that she will have to work twice as hard to be heard, seen, or taken seriously, but emphasizes that pushing back underrepresented voices is ubiquitous and should not stop Muslim youth from reaching their full potential.

Did you know Ms Maruf’s writings have already been published in Sun Sentinel and Washington Post! If you missed these, head over to her page to read more of work: www.ramishahmaruf.journoportfolio.com