Scents swirl, long skirts whirl as the two young Syrian women cook traditional meals in this Coral Gables kitchen across the globe from their war-torn homes.

Kholoud Al Shareef, 31, and Yasmeen Zobi, 23, move from one billowing pot to the next, speaking to one another in Arabic as they try to figure out the stainless-steel German appliances in this home that is not their own. Their faces glisten beneath their hijabs — Kholoud’s the tri-color of the Syrian flag, Yasmeen’s an elegant glitter of black sparkles — as each of the six burners and both ovens warm the sleek kitchen of burled wood cabinets, travertine tile and Edison lights.

When the homeowner, Mafe Estevez-Breton, pops in, they pantomime to one another in a mix of their Arabic and her blend of Colombian Spanish and accented English. Estevez-Breton is busy herself, sweating through a T-shirt and shorts as she sets tables in her palm tree- and bamboo-lined poolside backyard for 30 guests who will soon arrive to break bread in support of the two women who arrived as refugees just four months ago.

Kholoud and Yasmeen are among more than 40 Syrian families who fled their country and spent more than a year living in limbo outside the borders before the United States chose them to relocate to South Florida. Here, they found a culture a world apart from their own, with scant services and no family to help them acclimate or rebuild their lives.

What they did find were other women willing to help.

A suburban mom, a Connecticut transplant, who called a local mosque asking how she could help when discussion of a Muslim ban began. A women’s organization of mostly Pakistanis whose members’ only tie to the Syrian refugees was their shared religion. And Miami women offering their homes.

Together, they created what they’re calling the Syrian Supper Club of South Florida. Each month, a different family volunteers to host a dinner at their house. Two of the recently arrived Syrian women cook a traditional Syrian meal, then sit to eat with a diverse mix of diners of varied nationalities, religions and cultural backgrounds while they tell the story of their long and often painful journey. They take home a donation from the cost of the dinner tickets.

“This is a beautiful show of inclusion. You’re breaking bread together,” said Yasemin Saib, the Pakistani co-founder of the supper club and chair of the Muslim Women’s Organization of South Florida. She often acts as an interpreter for the Syrian families, both at the dinners and as they seek out English lessons and job interviews.

Saib arrived four hours after Kholoud and Yasmeen started to prep at Estevez-Breton’s house, determined to make everything from scratch.

“When you give these ladies the opportunity to cook, it does something amazing, something miraculous for their self-confidence and their sense of self-worth,” Saib says as she begins to wash dishes piling up in the sink, despite her designer silk blouse and perfectly applied makeup.

Scents waft out of the kitchen in waves.

In the first few hours, it’s the grassy brightness of herbs, mounds of minced parsley from the trays of tabbouleh salad. Then comes the searing meat, the lamb shoulders browning in a pot that will become lamb with plump freekeh wheat grains. Chicken baked with bright orange spices fills the air.

A blast of spices marks the pickled cucumbers boiling in a pot of curry on their way to being stuffed with ground beef and rice, similar to the the mandala-like plates of yaprak, rice-and-beef stuffed rolled grape leaves.

Toasted cashews and almonds sautéeing in vegetable oil will give that nutty crunch to the kabsa, the orange-spice baked chicken that will be nestled in basmati rice.

Plates of Syrian food soon fill every horizontal surface in this foreign kitchen. When they run out of room at the eat-in kitchen table, peninsula and counter, Kholoud and Yasmeen slide trays of grilled, sliced shawarma rolls on the kitchen floor.

When Nour Hunaidi walks in the kitchen side door, she nearly breaks into tears — and her mouth begins to water. Nour has been volunteering as a translator for the women’s organization since she came to America as a student six months ago. Her family left Aleppo in 2013 and lived as refugees in Lebanon, Algeria and Saudi Arabia — where her parents, former doctors, still remain — while she moved on to Malaysia. This food transported her home.

“This is all my favorite food in one place,” Nour said. “I haven’t eaten anything Syrian in months. I took all of these things for granted, you know?”

There is less than an hour before dinner, and there is too much to do to stop and talk.

So Kholoud and Yasmeen speak through the work, recounting the harrowing decision to flee the bombings and urban street war in the only home they have ever known, while tending to sizzling pans and bubbling pots for recipes they had to carry in their minds.

Kholoud stayed in her home city of Daraa, where the rebel uprising began, as long as she could. But when factions started trying to recruit her brother at gunpoint, the family fled toward Jordan. Yasmeen had left Daraa much earlier, as soon as the bombing started in 2012, when she was just 18.

“It’s a human disaster,” Kholoud said through a translator. “It was humiliating leaving Syria. Walking through the desert for days. Women. Children. Elderly people. We didn’t know if we would be allowed into Jordan or turned back to Syria.”

When they arrived in Jordan, authorities penned them in at the Zaatari refugee camp, a shantytown of canvas tents over three square miles in the desert.

“They treated us like animals. It was just tents in the desert,” she said. “It was inhumane, overcrowded. I refused to stay with my kids at the camp.”

A contact in Jordan helped them out of the camp. She was given legal status after leaving the camp, but they could not work legally. Without any way to make money, she and her husband, Saleh Hussein, 25, started working under the table, hoping the situation in Syria would change. But it only got worse.

She applied for asylum with the United Nations, which started the year-long process of vetting her, her husband and their then-infant daughter Yara. It was representatives from the United States who chose her and her family to fly across the world for refuge (after their own rounds of interviews). It was a world away from anything or anyone she knew — but it was better than worrying for her daughter’s safety every day.

“It was no place to raise children,” she said.

No one talks for what feels like a long time as the sound of bubbling pots fills in the silence.

But that’s when the children blow into the room.

Kholoud and Yasmeen’s husbands, Saleh Hussein and Maher Owair, bring the children from across the street, where they have been keeping them busy at a neighbor’s house. Yara, 20 months old, squeals at seeing Kholoud. Yasmeen’s son Yanal, 19 months, and daughter, Seidra, 3, walk in hand-in-hand, dressed for dinner. The men, not used to this flipped role, shoo them into the living room while their wives work.

That neighbor, Kate Cruz, is the reason for all of this. Today, she is the one who has spent the day running back and forth from her house, bringing over bowls and casserole dishes as the women needed more cooking supplies. But earlier, she was the one who felt a “profound sadness” at talk of a Muslim ban that kept out desperate Syrian refugees.

She cold-called the mosque in Miami Gardens, which put her in touch with the Muslim Women’s Organization. A month later, the first supper club was born at her house. The two women who cooked that day now have jobs at a local restaurant.

“I felt there had to be a way to do something good without doing anything overtly political. And who is going to object to feeding people?” she said as she came in with the children, dressed for dinner.

Cruz drove more than an hour and a half north to Davie to take the women (children in tow) shopping at a Foodtown grocery store, which stocks exotic ingredients (including a separate halal meat section) that are often impossible to find at other stores.

“I felt this sense of we as Americans, this is not how we treat other people. I was not going to turn my back on them. I wanted to help,” she said.

The doorbell chimes, and the first of more than 30 guests arrives. There’s a mad final push as dishes are plated and brought into the backyard, which is awash in incandescent bulbs and candlelight bouncing off of the long, white-linen tables.

A light drizzle begins to fall, enough that Mafe’s husband, Alejandro, and several other men deploy canvas tents over the tables and the food is quickly moved to a covered porch on the side. But the mood is far from dampened. The close quarters spark conversations among diners of all backgrounds — Argentine, Colombians and native Miamians; Jews and Muslims and Latin Americans; young couples who left their toddler with a sitter; older couples who call themselves foodies.

And among them, Yasmeen and Kholoud and their families, the children darting between their legs and angling for a buffet that fills the evening with scents unknown to many of those here. Kholoud sat with her daughter on her lap, Yasmeen with her son, both of them offering sippy cups of milk.

“The most important thing is that people like and enjoy it,” Yasmeen says.

The tables overflow with tart and bright hummus, creamy baba ganoush and crispy kibbeh, a feast of Syrian cuisine.

“Something that I had not had before, the one with the chicken with the almonds and basmati rice, oh, the flavors — it was absolutely fantastic. The flavors are first-rate,” said Guillermo Rossel, a former World Bank employee who traveled the Middle East and had tasted authentic dishes.

The clouds ceded to a clear, star-studded Saturday night, the air cool from the rain. And that’s when the diners moved to the chairs set up in rows on the covered patio and the families shared their stories through an interpreter.

They were asked about their journey, their biggest fear coming to the United States, and they confess they worried about how they would be received amid the anti-Muslim rhetoric from the U.S. administration.

“We had seen what was being said. We were afraid of not being accepted. Would we be able to wear our hijab?” Kholoud said.

They were asked how they like the weather. “My favorite part is the weather,” Saleh said just seconds before his wife said that the only thing that was hard to get used to was, naturally, the weather. Everyone laughed.

As the discussion wrapped up, the children fell asleep in their tired mothers’ arms.

When they were asked, finally, what was the one thing they wanted above all else, Kholoud spoke for herself, for all Syrians:

“Safety,” she said. “We left Syria for Jordan because it was not safe. But we were not safe in Jordan. So we hope to find safety here. For us and for our children.” 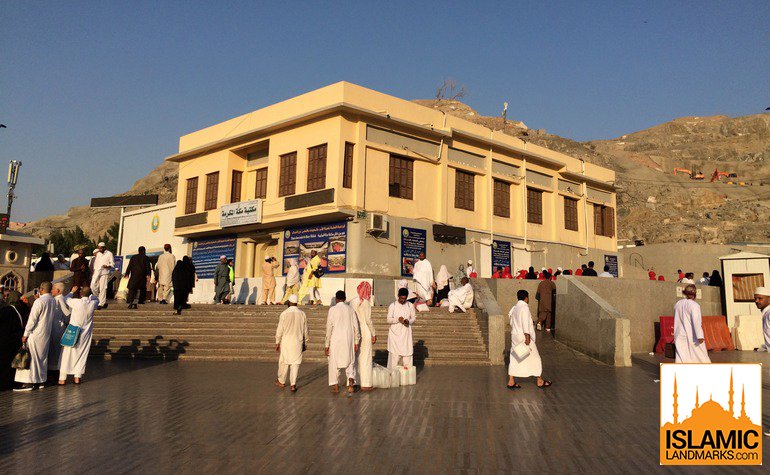 Birthplace of the Prophet (ﷺ)