(Miami, FL  05/31/2020) The Muslim community came to show their support for “Justice For George Floyd” rally in Downtown Miami on Sunday, May 31.

Thanks also to a big crowd of Non-Muslim supporters who joined the rally, including representatives of Dream Defenders.

Special thanks to Br. Abubakar, Imam Nasir, Br. Khurrum Wahid of Emgage, and all other community leaders for delivering a very inspirational message to the crowd about Islamic perspective on social justice, equality, and community engagement.

We would also like to thank all the volunteers from ICNA-CSJ, YM, and South Florida Muslim Federation for organizing this event in such a short time. Thanks to various media/press channels including local affiliates of CBS, ABC, NBC, Hispanic network, and Miami Herald.

Here are some of the Event photos:

Statement on the Death of George Floyd

On May 26, 2020, the world watched in horror as an officer kneeled on George Floyd’s neck for more than eight minutes until Mr. Floyd took his last breath. In those eight minutes, he was handcuffed and face down on the concrete posing absolutely no threat to the officers. He pleaded with the officer telling him that he was in pain and that he couldn’t breathe only to be completely ignored. It was all too reminiscent of Eric Garner’s “I can’t Breathe!”

Because this incident is so fresh in our minds and it happened to be recorded, we see an immediate emotional response, but what happens when time has taken its course and things resume as always? What happens to all those who were wrongfully killed by law enforcement, but there was no recording? At what point does a society say that it is now time for a systemic change? At what point do we hold each other accountable to do something rather than merely say something when the topic is hot on the press? The South Florida Muslim Federation stands with the African American/Black Community and the community at large to put a stop to police brutality; to work towards implementing preventive measures to stop racial profiling, and to combat discriminatory implementation of the law. It is our obligation to ensure that the African American/Black community can feel safe, and to reduce this constant trauma of reliving racism. We must begin the dialogue and implement a plan for systemic reform. Prevention must be the focus and police officers who use excessive force must be charged and convicted for their crimes.

We live in a society where athletes are demonized for taking a knee during the anthem wherein they have their livelihood stripped away from them for expressing their beliefs, but the statistics are alarming. “Police Officers are indicted in less than 1% of killings, but the indictment rate for civilians involved in a killing is 90%.” (Five Thirty Eight). “People who are African American or Black are twice as likely to be killed by a police officer while unarmed compared to a Caucasian/White individual.” (The Guardian)

Angela Davis once said that “In a racist society, it is not enough to be non-racist, we must be anti-racist.” Like many who came before us, it is never an easy task to speak out and be bold in your fight for justice. People have paid a heavy price for doing so. Nonetheless, we ask you today to join us in putting pressure on each other to take consistent preventative action rather than having to be reactive when we have yet another brutal murder at the hands of those who are hired to serve and protect.

Note that this list is not all inclusive, but merely a small sample of those we have unnecessarily lost #Saytheirnames 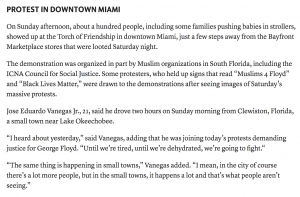