QUIET IN KASHMIR – by Waseem Quadri!

It is such a disgrace that Indian Prime Minister Narendra Modi and our president, Donald Trump, will address 50,000 Indian Americans at the “Howdy, Modi” mega-event in Houston, Texas on Sept. 22.

Innocent Kashmiris have been under curfew and under siege since Aug. 7. 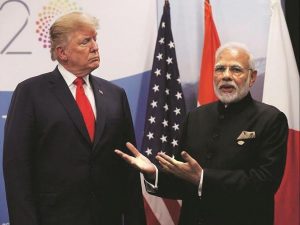 If India wants to show the world Kashmir is back to normal, then downed shutters, empty school-yards and unpicked fruits will make sure it hears a different story. For the betrayed mainstream, the silence is the only way to be heard; civil disobedience, of sorts. There is nothing normal here, except for the normalization of conflict. Today, Kashmir is silent. Its mainstream defeated, its separatists on edge. But the Modi government revels in its victory over Muslim Kashmir. It will be wrong to mistake this silence for acceptance. The world must denounce this cowardly act. 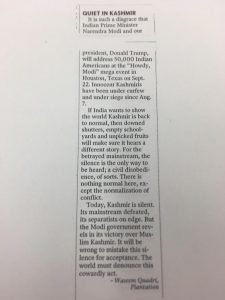