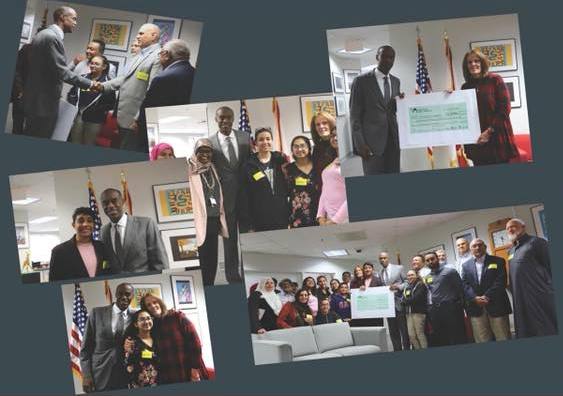 On March 5th, 2018, over a dozen members of the Muslim community met with Broward County School superintendent Robert Runcie, to deliver the funds collected by the Muslim Community in support of the victims of the tragic shooting at Marjory Stoneman Douglas School.

The effort involved many local Islamic organizations, and was coordinated by the South Florida Muslim Federation. A generous amount of $15,668 collected by the Muslim community was delivered to a fund that is part of the Broward Education Foundation, which is specifically dedicated to support the victims of the Marjory Stoneman Douglas shooting.

During the check presentation, several Muslim youth shared their stories and concerns with superintendent Robert Runcie, including attendees of MSD. Superintendent was impressed by the strength, resilience, and courage demonstrated by the youth.

The South Florida Muslim Federation’s Board of Directors would like to thank all of you for the tremendous support you have shown for our united campaign to support the victims of the horrific Marjory Stoneman Douglas school shooting. You have exceeded all expectations! We raised our initial goal from $10k to $15k and we have even surpassed the second goal. You have helped us exemplify the essence of Islam, which is mercy. This tragedy occurred right in our own community – 17 innocent people lost their lives. We, as Muslims, are a part of the society – this is our home.

As a community, we are always looking after each other, regardless of our differences. God Almighty says in the Holy Qur’an to, “Serve God, do not join partners with Him, and do good to parents, kinsfolk, orphans, those in need, neighbors who are near, neighbors who are strangers, the companion by your side, the wayfarer (you meet).” (4:36)

Following a tremendous response from the Muslim community, the online fundraising campaign goal coordinated by the South Florida Muslim Federation has been increased to $15,000 (previously was $10,000). This united campaign has been covered by the Independent, and featured on Yahoo. The South Florida Muslim Federation would like to sincerely thank all the organizations and individuals that came together to collaborate for this tremendous effort. Please continue to support and pray for the victims families. The concerted Florida Muslim community efforts come after the February 14th school mass shooting at Stoneman Douglas High School in Parkland, Florida that resulted in 17 people dead, dozens wounded, and hundreds of other kids and adults terrorized.  The South Florida Muslim Federation coordinated this relief efforts with the Council on American-Islamic Relations-Florida, Friends of Humanity Int., COSMOS, EMGAGE, ICNA, Islamic Relief USA, IFSF Food Pantry, UHI Clinic, Muslim Women’s Organization, and various other mosques and Islamic Centers across Florida.

May God Almighty bless and reward each and every one of you. Let’s continue to work together!