What to See at Prophet’s Mosque

As it stands today, the Prophet’s Mosque has a rectangular plan on two floors with the Ottoman prayer hall projecting to the south. The main prayer hall occupies the entire first floor. The mosque enclosure is 100 times bigger than the first mosque built by the Prophet and can accommodate more than half a million worshippers.

The Prophet’s Mosque has a flat paved roof topped with 24 domes on square bases. Holes pierced into the base of each dome illuminate the interior. The roof is also used for prayer during peak times, when the 24 domes slide out on metal tracks to shade areas of the roof, creating light wells for the prayer hall. At these times, the courtyard of the Ottoman mosque is also shaded with umbrellas affixed to freestanding columns. The roof is accessed by stairs and escalators. The paved area around the mosque is also used for prayer, equipped with umbrella tents.

The north façade has three evenly spaced porticos, while the east, west, and south façades have two. The walls are composed of a series of windows topped by pointed arches with black and white voussoirs. There are six peripheral minarets attached to the new extension, and four others frame the Ottoman structure. The mosque is lavishly decorated with polychrome marble and stones. The columns are of white marble with brass capitals supporting slightly pointed arches, built of black and white stones. The column pedestals have ventilation grills that regulate the temperature inside the prayer hall.

This shiny new Prophet’s Mosque contains the older mosque within it. The two sections can be easily distinguished: the older section has many colorful decorations and numerous small pillars; the new section is in gleaming white marble and is completely air-conditioned.

The most notable feature of the Prophet’s Mosque is the Green Dome of the Prophet, which rises higher amongst the sea of white domes. This is where the tomb of the Prophet Muhammad is located; early Muslim leaders Abu Bakr and Umar ibn al-Khattab are buried in an adjacent area as well. 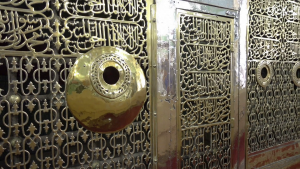 The heart of the mosque houses a very special but small area named ar-Rawdah an-Nabawiyah, which extends from Muhammad’s (s.a.w) tomb to his pulpit. Pilgrims attempt to visit and pray in ar-Rawdah, for there is a tradition that supplications and prayers uttered here are never rejected. Entrance into ar-Rawdah is not always possible (especially during the Hajj season), as the tiny area can accommodate only a few hundred people. Ar-Rawdah has two small gateways manned by Saudi police officers. The current marble pulpit was constructed by the Ottomans. The original pulpit was much smaller than the current one and constructed of palm tree wood, not marble. Ar-Rawdah an-Nabawiyah is considered part of Jannah (Heaven or Paradise).

It is prescribed for the one who visits the mosque to pray two rak’ahs in the Rawdah or whatever he wants of naafil prayers, because it is proven that there is a virtue in doing so. It was narrated from Abu Hurayrah that Muhammad (s.a.w) said: “The area between my house and my minbar is one of the gardens (riyaad, sing. rawdah) of Paradise, and my minbar is on my cistern (hawd)” Narrated by al-Bukhaari, 1196; Muslim, 1391.

And it was narrated that Yazeed ibn Abi ‘Ubayd said: “I used to come with Salamah ibn al-Akwa’ and he would pray by the pillar which was by the mus-haf, i.e. in the Rawdah. I said, ‘O Abu Muslim, I see that you are keen to pray by this pillar!’ He said, ‘I saw that the Prophet (peace and blessings of Allaah be upon him) was keen to pray here.’” Narrated by al-Bukhaari, 502; Muslim, 509. 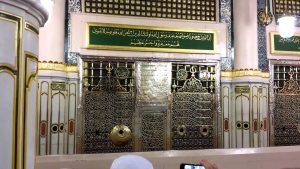