For decades, South Florida has welcomed wave after wave of people fleeing political and economic unrest in their home countries. Cubans. Haitians. Nicaraguans. Colombians. In a region awash with exiles, you would think it would be easy to accommodate the latest swell of refugees.

Tell that to a Syrian.

The number of Syrian refugees coming to Florida has spiked in recent years, as the U.S. has started to accept more people escaping the war-torn Middle Eastern nation. But resettling these newest immigrants has proven challenging for aid agencies, charities and volunteers who help the new arrivals. Syrians don’t have a large community of their countrymen awaiting them — or many Arabic speakers with whom they can communicate.

“Life without language is very hard,” Kamar Byrkdar, a 27-year-old Syrian refugee who arrived in Broward County five months ago with her husband and two children, said through an interpreter. “We want to be able to improve our English so that we’re able to stand on our own two feet.”

When the Byrkdars arrived, after a three-year wait in Lebanon, they had work permits, Medicaid and an apartment west of Fort Lauderdale. But it took three months, Byrkdar said, for anyone to show them how to enroll their kids in school. She and her husband didn’t know how to buy bus fare, much less how to navigate routes. Byrkdar learned where she could sign up for English classes only three weeks ago. Her children remain anxious around the police, whom they associate with war.
Now they have to contend with the emotional stress of President Donald Trump’s travel ban, which barred entry into the U.S. for 90 days for citizens of Iran, Iraq, Libya, Somalia, Sudan, Syria and Yemen. It also indefinitely suspended the admission of Syrian refugees, and prohibited refugees from all other countries for 120 days.

The ban was frozen by the courts, and the White House has pledged to issue a new, more tailored one next week. Syrian refugees will reportedly no longer be singled out and rejected under the president’s rewritten executive order. Homeland Security intelligence analysts found insufficient evidence that people from the countries covered by the ban pose a terror threat to the U.S., according to a draft document obtained Friday by The Associated Press.

Even under the original order, families like the Byrkdars wouldn’t have been affected, since they’re already here. But ask the Byrkdars about Trump’s action, and they say they’re worried.

“We came here lawfully, legally. All of our papers are in order,” said 38-year-old Ammar Byrkdar, Kamar’s husband. “But we are afraid he might send us back to the war in our country.”

“I’m grateful to the U.S. for giving us safety and security,” he added. “All we want to do is live in peace.”

By the numbers
The number of refugees coming to Florida nearly tripled between 2011 and 2012, after the State Department resumed processing Iraqi refugees. Last year, the state’s refugee inflow jumped again, growing from 623 in 2015 to 1,301 in 2016, when Syrian refugees started resettling in the state in earnest.

Since 2002, 5,556 refugees from the affected countries have settled in Florida, according to data from the federal Refugee Processing Center. That’s roughly the same number as smaller states such as North Carolina, Maryland and Oregon, but far fewer than California (63,773 refugees), Texas (28,810), Michigan (25,733) and Minnesota (17,829).

The state is also the natural landing place for many more Cuban and Haitian migrants who aren’t counted as refugees. Between October 2015 to September 2016, more than 55,000 Cubans and Haitians came to Florida fleeing turmoil and repression in their home countries.

Ana Maria Teixeira, resettlement manager for the Miami office of the International Rescue Committee, one of six resettlement agencies in the area, said some local employers hesitate to hire refugees who don’t speak Spanish. But refugees with limited English can still do well in back-of-the-house jobs in restaurants, hotels or warehouses, she said.

“More often than not, the people fully integrate,” said Teixeira, whose agency had nothing to do with the Byrkdar family. “The refugees, at the end, are very resilient. They’ve been through hell and back. It takes a lot of courage to start anew.”

Miami’s IRC office opened in 1960, three years into the autocratic rule of François “Papa Doc” Duvalier in Haiti and the same year unaccompanied Cuban children began arriving in the U.S. under Operation Pedro Pan. It was the agency’s second U.S. site, after New York. Over the years, the Miami office has resettled scores of Haitians and Cubans — but also Colombians, Bosnians, Congolese and Iraqis.
Resettlement agencies guarantee refugees three months of assistance — $1,000 per person per month — to cover all their expenses. That’s hardly enough, so refugees depend on charities and volunteers for additional help. That’s especially true for refugees from places like Congo or Syria, who unlike Cubans and Haitians don’t usually have family or friends in the area.

The Byrkdars, who didn’t know a soul in the U.S. before they landed, have been helped by members of a nearby church, and by the Muslim Women’s Association of South Florida, whose volunteers routinely put out calls for donations ranging from groceries to furniture when new families arrive.

“There are a lot of gaps,” said Sahar Shaikh, the group’s president.

Yasemin Saib, the group’s chairperson, met the Byrkdars a couple of weeks ago at the Islamic Center of Greater Miami, a Miami Gardens mosque. When Kamar Byrkdar mentioned that her son, 7-year-old Saeed, had a toothache, Saib found a dentist and made an appointment. Good thing, too: The first-grader had an abscess, Saib said.

“I would want someone to do this for me if I were in their shoes,” said Saib, who translated for the Byrkdars when reporters visited Thursday.

Refugees will keep coming
Only six states (Illinois, Virginia, New York, New Jersey, Texas and Michigan) have more Muslims per capita than Florida, according to the 2010 U.S. Religious Census, a private survey conducted by religious groups. Florida’s Muslim population is scattered throughout the state, with the highest concentrations in the Tampa and Orlando areas, and federal data show Muslim refugees generally end up in those areas, as well as in Jacksonville.

Florida has sizable Muslim base

The U.S. is home to 2.6 million Muslims, according to the 2010 U.S. Religious Census. 164,846 live in Florida, making it the state with the seventh-highest number of Muslims per capita in the U.S. The ability to be welcomed into a familiar culture greatly helps refugees settle into their new lives, experts say.

After the ban, the arrivals of three Syrian families were canceled, said Teixeira — and then rescheduled.

The federal money to assist refugees — a $250 million program in Florida — is disbursed through the state’s Department of Children and Families. A Florida House committee voted Feb. 16 to end the state’s role as the middleman, claiming that the feds don’t give state law enforcement agencies enough information about the refugees. Not running the program, however, could result in Florida’s losing access to any refugee information — and in higher costs for nonprofits that would then be tasked with administering the program.
Either way, the refugees will keep coming.

At home in their immaculate apartment, Kamar Byrkdar serves a plate of halawet el jibn, a traditional dessert of cheese rolls. She pulls up a cellphone picture of the bombed-out three-story apartment building where they lived in Darayya, a Damascus suburb. They left about five years ago, before the bombings, but after the shooting started, Byrkdar said, mimicking the sound of weapons.

Byrkdar would like to be a nurse. Her husband declares himself lucky: He found a job as a butcher, his old profession, in a Middle Eastern market in Plantation. (“Not just any butcher,” he said with a twinkle in his eye. “A good butcher!”) It takes him an hour and three buses to get there and back every day. The family has a car, but it broke down.

“It’s so easy to drive here!” he said. “The roads are clean and organized.”

Their daughter, 9-year-old Seham, shows off her English — and Spanish, which she’s also learning in school (she can also rattle off a few words of French). Over and over again, her parents express their gratitude, in spite of the hardships they’ve faced in their new home.

“The first week, we didn’t even know what time it was,” Ammar Byrkdar said.

“I have a dream for children here,” Kamar Byrkdar said, in her limited English, as she pointed to her daughter. “She is a future doctor.” (“I like teacher and doctor,” Seham cut in.) Then, pointing to her son, Byrkdar added: “Him, a doctor too. College!” 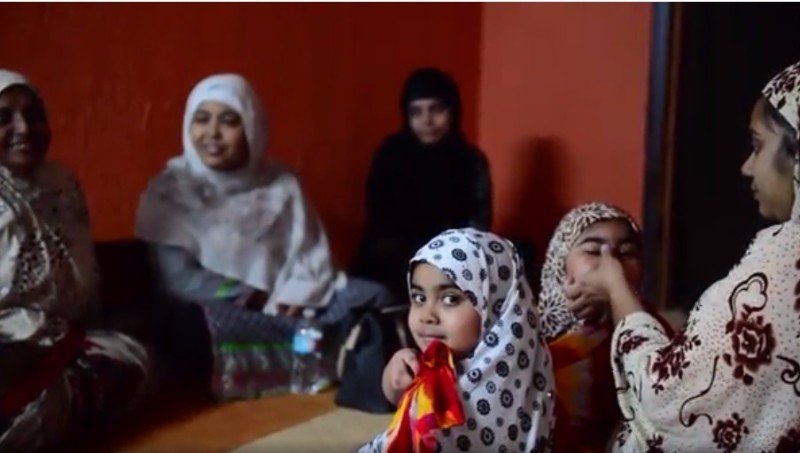 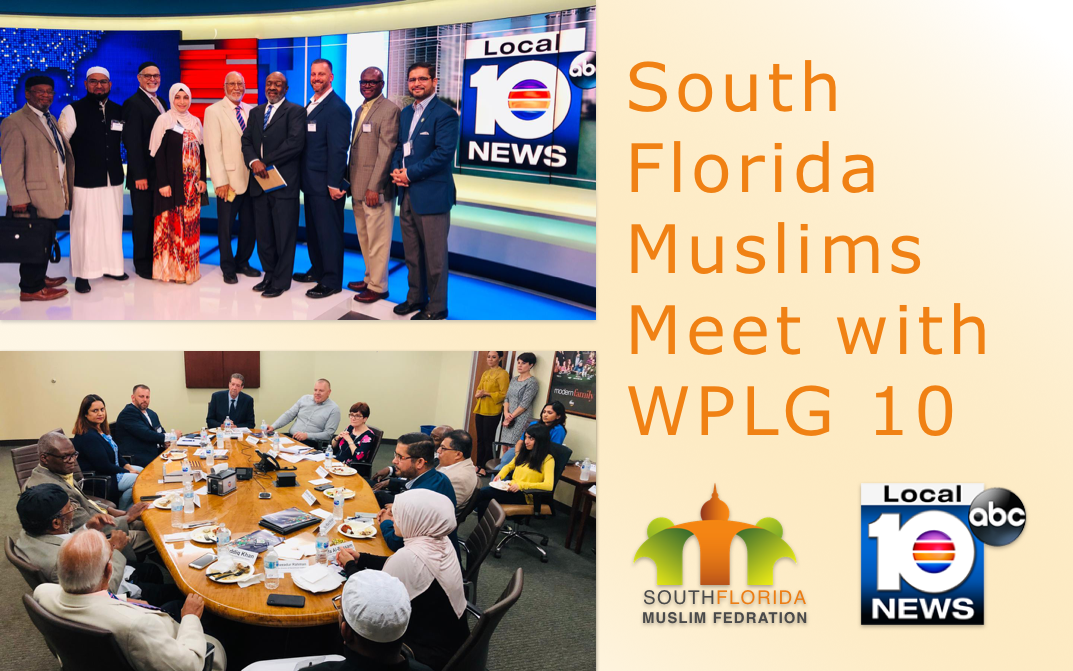