He can stop running backs.

He can stop quarterbacks.

Azeez Al-Shaair is a senior linebacker at Florida Atlantic University, and he knows a certain segment of the population stopped processing anything about him about the time they came to the hyphen in his name.

“Everybody knows I am Muslim just from my name,” he said.

But just because everybody knows that about Al-Shaair doesn’t mean they actually know Al-Shaair. Or what it means to be a Muslim football player in this climate — political climate as well as atmospheric.

To say the Owls have accepted Al-Shaair as one of their own doesn’t begin to tell the story. He’s the type of leader who, when he opens his mouth, others shut theirs. He’s only 21, but with maturity and wisdom beyond those years from a lifetime of hardship that includes seeing his family’s home burn to the ground. Shortly thereafter, he turned to football as a way to take out his frustrations.

“It was kind of the one time where I felt like I was good at something, or was worth something,” he said.

NFL scouts have an idea of what Al-Shaair, a 6-foot-2, 228-pound senior, is worth, and it’s much more than he once thought. It’s why he nearly didn’t return for his senior season, which begins Saturday at Oklahoma.

As for those who prejudge … 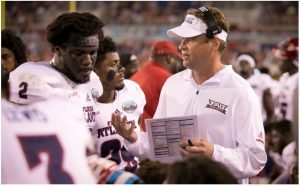 “I can’t be the person that’s going to stop that, but what I can say is that anybody who meets me, whether it be Muslim or whatever, the same way I might meet somebody and they might be something — I just need to know who that person is first,” Al-Shaair said. “And if I don’t know you, I can’t judge you.”

If someone knows Al-Shaair?

“You understand the type of person I am, and I’m a good person,” he said.

FAU defensive coordinator Tony Pecoraro believes Al-Shaair is a good person. And a resilient one, because being a Muslim football player in Florida means undergoing an extreme test of faith. Ramadan, the ninth month of the Islamic calendar, requires fasting from dawn to sunset, and it encompasses parts of May and June.

That means not even a sip of water. During practice.

“Going out there and working just as hard as everybody else — that to me was pretty much amazing to see, to be honest with you,” Pecoraro said. “The dedication — everybody else sees that. They’re dying, but they’re sitting there, sipping water. He doesn’t do that. He fought through it and when I saw that, I kind of knew he’s pretty special.”

Al-Shaair said he’s not even tempted to take an occasional sip.

“My religion and my faith really has made me who I am,” he said.

Al-Shaair recently received the Wilma Rudolph Award as one of five athletes nationally who overcame great personal, academic or emotional odds to succeed in college athletics. Yet when he reflects on those obstacles and his faith, he talks about “everything that I’ve been blessed with.”

So, no — no sips on the sly, even when the heat index hits triple digits.

What all the other Owls do, Al-Shaair does. There’s no dialing back to make concessions for his situation.

“Sometimes, I don’t know how I do it,” he said. “I honestly don’t. Like I said, just having that discipline in my faith and just trusting it.”

As soon as the sun goes down, he shifts into an entirely different mode.

“Eating like crazy, drinking like crazy,” he said. “It works, but it’s always hard. It’s so crazy because I gain more weight during that time than I do any other time of the year.”

When teammates ask about his faith, Al-Shaair is open to discussing it. He respects others’ beliefs, saying of the ultimate answers, “We all know what we believe is the truth, but you really don’t know until you’re dead and then you can’t tell me then.”

What transcends religions, he said, is this: “When you have something to believe in, when you have values, it stops you from doing things that might come into your head. Negative things. You see people shooting up schools and killing different people. When you don’t have any type of guidance or a foundation of things that you go by, and morals, it really can create chaos.”

Al-Shaair can speak for hours about the chaos he has experienced. The house fire, before his sophomore year of high school, started after an older sister accidentally left the stove on. A smoke alarm awakened him, then he woke up everyone else in the house to get them to safety. The house, however, could not be saved.

The family was insured, which got them into a motel. About 10 relatives were crammed in for nearly a year, with a bed and a pull-out couch. Azeez slept on the floor.

“My high school coach, he was a manager at the motel we were staying at, but I didn’t know that,” he said. “And probably the lowest of the low was seeing him at the motel, because nobody knew. I wouldn’t tell anybody.”

The motel was a two-hour bus ride from Hillsborough High.

“I just remember taking those bus rides after practice home, like 9 o’clock, 10 o’clock at night,” he said. “I’d be sitting there like I just want to cry myself to sleep, not even caring anymore. Looking back, it was kind of scary because I didn’t know how I was going to get out of that situation. But to be here, I’m just blessed.”

That’s not the only reason he received the Rudolph Award. His family lived in Saudi Arabia for two years starting when he was 4. After returning to the States, his parents soon divorced, leaving Azeez, his mother and siblings in Section 8 housing.

Last season, he suffered an elbow injury requiring Tommy John surgery. He opted to postpone surgery until after the season, but still made double-digit tackles in every game except a blowout in which FAU’s starters were pulled. He made 117 tackles during the Owls’ 10-game winning streak and is their all-time leading tackler.

If finding his niche in football qualifies as a blessing, so too is his relationship with girlfriend Yahaira, whom he became engaged to early this year. More reason to think his luck is changing.

“It’s so funny because I was always a negative person,” he said. “I had a smile on my face, but in my mind, I always thought negative. Like, there’s no way good things could happen to me.”

When the opportunity to play college football came his way, Al-Shaair chose to major in public safety administration. The idea was to give back by becoming a firefighter. Pro football might have something to say about that. He sat down with FAU coaches including Lane Kiffin after last season but chose to return.

“Sitting there, praying and thinking about it, I just looked at my life,” he said. “I started off in football my sophomore year of high school. Everything I’ve ever gotten has always been from being patient.”

This preseason, Sports Illustrated rated him the 79th-best player in the country. If and when that NFL contract comes his way?

The MuslimBan is born out of fear, not real policy! Republican Debbie Mucarsel-Powell Tweeted.