Is there a God?

How to reason with someone who denies the existence of God?

If God exists, why is there so much pain?

If Islam has all the answers, why are so many Muslims turning away from it?

Taking the first question on existence of God, Br Shakeel from Islamic Center of Weston, emphasized on the need to take a more logical approach in handling such questions. ‘Instead of getting intimidated, ask an atheist to prove that there is no God’. According to him, this was the only way of dealing with someone who doesn’t believe in God.

Imam Nasir Ahmed while building an analogy between body and soul, described that just as we need to eat healthy to maintain a healthy body, a positive, and rounded spiritual knowledge was key to having a strong mind and healthy soul. ‘God is not to blame for trouble we see in world. The trouble we are seeing is because human being has violated his free-will.’

Sheikh Tarek Chebbi focused on the characteristics of an Atheists as described in the Quran. He eluded to Verse 23 of chapter 45 which describes ‘desires’ as the root of atheism. An atheist is a person who knows right from wrong but doesn’t want to overcome his desires. ‘Those who are atheists, when they are at the last stage of their lives, that’s when they show most remorse. Yet, they don’t want to accept…due the arrogance they have.’

To the question on why so many Muslims were leaving Islam, Imam Faisal responded by listing the three mains reasons he observed in his interactions with the youth. First, because they feel Quran was no longer relevant to the current times and that the deen is too harsh. Lastly, they fail to get the answers they are looking for. ‘We are only told to be Muslims. We are never told why we should be Muslims.’

Shaikh Shafayat while answering the question of the significance of being God-conscious, emphasized it is our job as Muslims to learn about the deen, build a strong knowledge and become agents for promoting and spreading Islam.

The event was attended by a large number of congregants and community members from across the tri-county area, who not only appreciated the effort but hope that more such events were organized in future as well. The complete panel discussion can be viewed below (57:31 minutes onwards). Included here are some of the glimpses from the program. 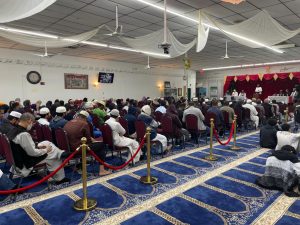 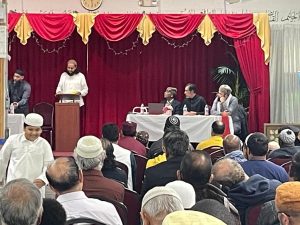