Al-Masjid an-Nabawi’s serenity is indescribable. The feelings and emotions that it evokes in the worshippers cannot be explained. The mosque exudes calmness and peace even while packed with thousands, and is a destination that cannot be properly put into words due to its magnificence. Its energy is magnetic and the reward of a prayer exceptional. May Allah (SWT) grant us all the ability to visit and offer our prayers at both of the Holy Mosques. Ameen.

Masjid al Nabawi is the second holiest mosque in Islam, the second-largest mosque in the world after the Masjid al-Haram in Mecca. It is a resting place of the Prophet Muhammad. It was built by the Prophet himself, next to the house where he settled after his migration to Medina in 622 AD. It was an open-air building with a raised platform for the reading of the Quran.

After the death of the Prophet, the mosque was again enlarged to twice its size. In 707, Umayyad Caliph al-Walid (705-715) tore down the old structure, in order to build a larger mosque measuring eighty-four by one hundred meters, with stone foundations and a teak roof supported on stone columns. The new mosque included the house of the Prophet under which he was buried. The mosque walls were decorated with mosaics by Coptic and Greek craftsmen similar to the decoration of the Umayyad mosque in Damascus and the one of the Dome of the Rock in Jerusalem built by the same caliph. 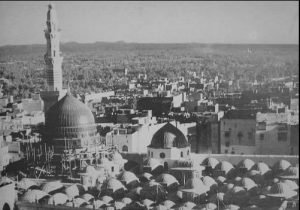 Abbasid Caliph al-Mahdi (775-785) period, destroyed the northern section of al-Walid’s mosque between 778 and 781 to enlarge it further. He added twenty doors to the mosque, eight on each of the east and west walls, and four on the north wall.

The Mamluk Sultans maintained the tradition of restoring and expanding of the Prophet’s Mosque. During the reign of Sultan Qala’un, a dome was erected above the house and tomb of the Prophet and an ablution fountain was built outside of Bab al-Salam. Sultan Nasir bin Muhammad bin Qala’un rebuilt the fourth minaret that had been destroyed earlier. After lightning that destroyed a big part of the mosque in 1481, Sultan Qaytbay rebuilt the east, west and qibla walls.

The Ottoman sultans who held the Hijaz region from 1517 until World War I, also contributed to the Mosque of the Prophet. Sultan Suleyman I (1520-1566) rebuilt the western and eastern walls of the mosque and built the northeastern minaret known as al-Suleymaniyya. A new mihrab, called al-Ahnaf, was built next to the Prophet’s mihrab known as al-Shafi’iyyah, and a new dome covered in lead sheets and painted green, above the Prophet’s House and Tomb.

During the reign of Ottoman Sultan Abdulmecid I (1839-1861), the entire site was remodeled with the exception of the Prophet’s Tomb, the three mihrabs, the minbar, and the Suleymaniyya minaret. The precinct was enlarged to include an ablution area to the north. The prayer hall to the south was doubled in width and covered with small domes equal in size except for domes covering the mihrab area, Bab al-Salam, and the Prophet’s Tomb. The domes were decorated with Quranic verses and lines from Nahj al-Burdah the famous poem by thirteenth-century Arabic poet al-Busiri. The qibla wall was covered with glazed tiles featuring Quranic calligraphy. The floors of the prayer hall and the courtyard were paved with marble and red stones and a fifth minaret, known as al-Majidiyya, was built to the west of the enclosure. 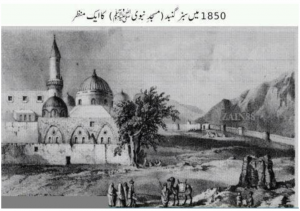 After the foundation of the Saudi Kingdom of Arabia in 1932, the Mosque of the Prophet underwent several modifications. In 1951 King Abdul Aziz (1932-1953) ordered major demolitions around the mosque to make way for new wings to the east and west of the prayer hall, which consisted of concrete columns with pointed arches. Older columns were reinforced with concrete and braced with copper rings at the top. The Suleymaniyya and Majidiyya minarets were replaced by two minarets in Mamluk revival style. Two additional minarets were erected to the northeast and northwest of the mosque. A library was built along the western wall to house historic Qurans and books on religion. In 1973 Saudi King Faisal bin Abdul Aziz ordered the construction of temporary shelters to the west of the mosque to accommodate the growing number of worshippers in 1981, the old mosque was surrounded by new prayer areas on these sides, enlarging five times its size. 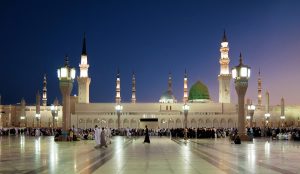 As it stands today, the mosque has a rectangular plan on two floors with the Ottoman prayer hall projecting to the south. The main prayer hall occupies the entire first floor. It has a flat paved roof interrupted by twenty-four domes raised on square bases. Forty-eight pierced into the base of each dome illuminate the interior. The roof is also used for prayer during peak times, when the twenty-four domes slide out on metal tracks to shade areas of the roof, creating light wells for the prayer hall. At these times, the courtyard of the Ottoman mosque is also shaded with umbrellas affixed to freestanding columns. The roof is accessed by stairs and escalators. The paved area around the mosque is also used for prayer, equipped with umbrella tents. The north façade has three evenly spaced porticos, while the east, west, and south façades have two. The walls are composed of a series of windows topped by pointed arches with black and white voussoirs. There are six peripheral minarets attached to the new extension, and four others frame the Ottoman structure. The mosque is lavishly decorated with polychrome marble and stones. The columns are of white marble with brass capitals supporting slightly pointed arches, built of black and white stones. The column pedestals have ventilation grills that regulate the temperature inside the prayer hall. The mosque enclosure is one hundred times bigger than the first mosque built by the Prophet and can accommodate more than half a million worshippers.